Your one-stop guide to becoming a POSH Warrior!

Who is a POSH Warrior?

A POSH Warrior is a student who is well versed with the Sexual Harassment of Women at Workplace (Prevention, Prohibition and Redressal) Act, 2013 (POSH Act), and how it applies to college campuses. A POSH Warrior will use this knowledge to take steps towards making their college campus safer, and college authorities accountable for their duties under the law.

Want to become Jhatkaa’s official POSH Warrior? Write to us at ishani@jhatkaa.org for more info!

This toolkit has been designed with the objective of providing the much needed information around sexual harassment of women employees and students in higher educational institutions in an easy to consume and simplified language.

Cases of sexual harassment in colleges and university campuses are rampant in India, yet there is little to no discourse around it. Despite these campuses hosting thousands of young minds, we have rarely seen enough safety measures being taken by the education institutions authorities to protect the people it is obligated to protect.

The power hierarchy between the employer & employees of these institutions also affect many women working in these spaces, making them vulnerable to harassment and discrimination. The very campus which is supposed to be a safe space, are marred by toxicity, discrimination and violence.

In 2018 we reached out to 2 students facing the very same harassment and discrimination for reporting a professor of sexual harassment. Despite there being a proper legal mechanism to protect these students and enabling provision for them to access redressal mechanisms, it took a year-long intervention from our side with multiple Twitterstorms, a viral comic illustration, media hits, phone calls and formal letters to achieve victory and force the university to take sexual harassment seriously.

The process made us realise that one of the major tools to fight this and ensure that no other case of sexual harassment at campuses take this long to get addressed is to aware the concerned people of the rights, duties and mechanisms that law provides to protect them as well as to access justice.

However, the legal language can be extremely complicated and overwhelming. In cases of people going through such harassment, unavailability of understandable information on the subject can be especially discouraging. Institutions with a lack of realisation of its duties and obligations, unawareness, and absence of seriousness towards the issue can become a hosting ground of such harassment.

“Is This Toolkit For Me?” - Take this test and find out! 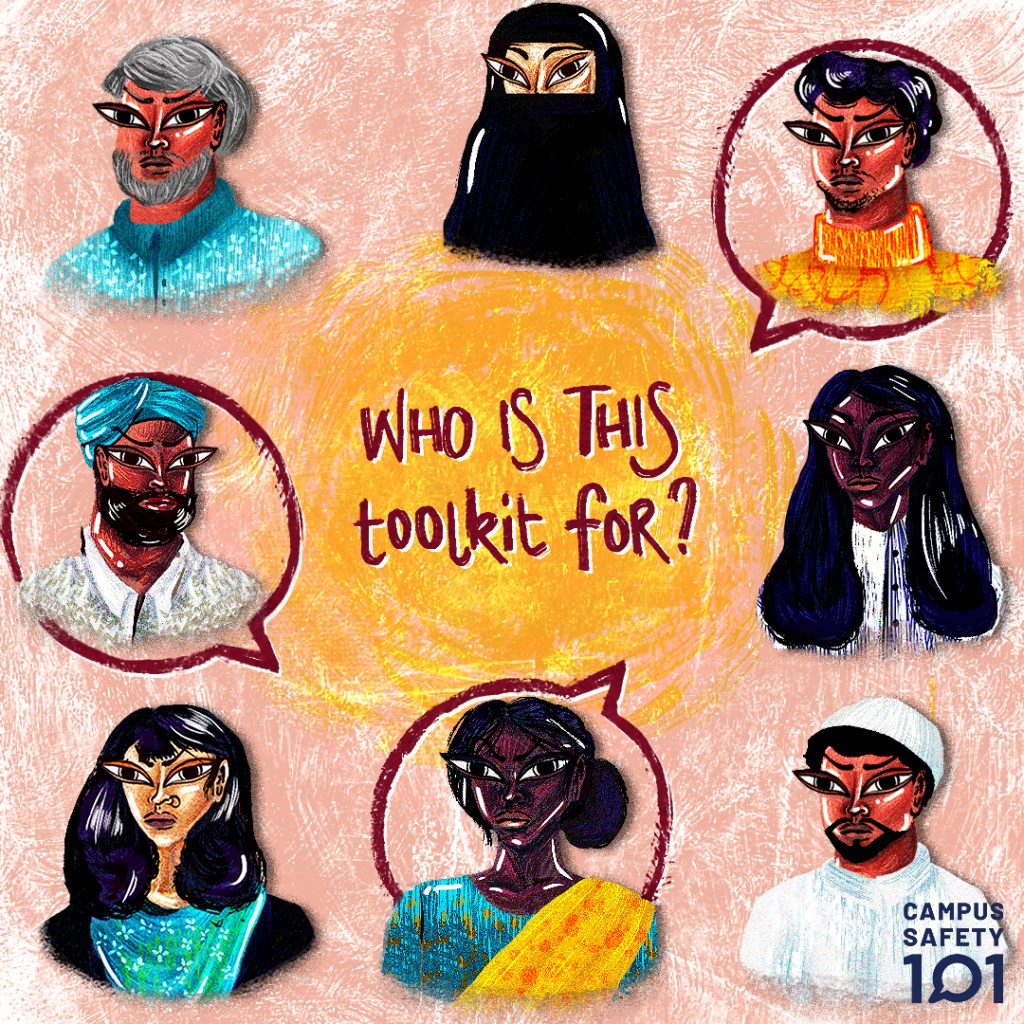 Sexual harassment, in general, can be understood as unwanted conduct with sexual undertones if it occurs or

What are some acts that can be considered as sexual harassment?

Sexual harassment includes one or all of the following unwelcome acts or behaviour, whether directly or by implication –

What would constitute “Sexual Harassment at the Workplace?”

What exactly is an ICC?

The Sexual Harassment of Women at Workplace (Prevention, Prohi- bition and Redressal) Act, 2013, and the University Grants Commission (Prevention, prohibition and redressal of sexual harassment of women employees and students in higher educational institutions) Regulations 2015, makes it mandatory for all employers and HEI respectively to constitute an Internal Complaints Committee to look into the matter of sexual harassment at workplace.

The ICC shall have the following composition –

Apart from these, ICC ought to have 3 students in the committee if the matter involves students. These students shall be enrolled at the undergraduate, master’s, and research scholar levels respectively, and should be elected through transparent democratic procedure.

The UGC Regulations also provides for any existing body which is already present at the HEI and functioning with the same objective as the ICC to be reconstituted as the ICC. For example – many universities have bodies like Gender Sensitisation Committee Against Sexual Harassment (GSCASH) which has similar objectives and functioning as that of an ICC. In such cases, HEI can reconstitute GCASH as ICC and ensure that the reconstitution is as required under the UGC regulations.

What reliefs can be expected from ICC?

There are three contexts in which ICC can make recommendations –

During the pendency of the inquiry, on written request made by aggrieved woman, ICC may recommend employer to –

Quick FYI! – The three months leave provided to the respondent would be in addition to leave she would be otherwise entitled to.

Quick FYI! – If the HEI feels the need, it can take these actions suo-moto, without waiting for the ICC to make such recommendations.

In case where the offender is an employee, apart from abiding by the service rules,  the HEI may take the following actions –

In cases where the offender is a student, the HEI may take the following actions –

In addition to other punishments, the following actions can also be taken against both the employee and student offenders –

The POSH Act and the UGC Regulations inculcate certain provisions against false or malicious complaints, to ensure that the Act and the Regulation introduced  for the protection of employees and students from sexual harassment do not get misused.

Quick FYI! – A mere inability to substantiate a complaint, or provide adequate proof does not count as false or malicious complaint. To make the complainant liable for punishment, there should be an inquiry that lays down clear and enough proof –

Quick FYI! – If any witness has given false evidence or produced forged/ misleading documents, then the employer of the witness can be asked to take action. Irrespective of the behaviour of the complainant and respondent, if the evidence provided by the witness is found out to be false, it is the witness who will be liable for the punishment.

The compensation decided shall be based on the following parameters –

The employer may deduct the compensation money directly in case the offender is an employee. If the employer is unable to deduct due to respondent being absent from duty or termination of contract, the ICC may direct the respondent to pay the sum directly to the aggrieved woman.

If the ICC arrives at the conclusion that allegations against the respondent have not been proved, it can recommend to the employer to take no further action on the complaint.

Quick FYI! – The employer must act upon the ICC recommendations within 60 days of receipt of the report.

How does one file a complaint?

How do I reach out to the ICC?

As per the UGC Regulations, it is the responsibility of the HEI to make all sections of the institutional community aware of the contact details of members of Internal Complaints Committee, as well as the complaints procedure. However, if this is not done, then one can contact the employer/head of the department or institution/human resource department to obtain information about the ICC constituted.

How does ICC inquire into a complaint?

The Complaints Committee will conduct an inquiry into the complaint by calling all the concerned parties i.e. complainant, respondent, witnesses etc. Minimum of 3 ICC members including Presiding Officer/Chairperson must be present while conducting inquiry.

For the process of inquiry, the ICC will have same powers as vested in a Civil Court under the Code of Civil Procedure, 1908, when trying a suit in respect of the following matters –

Quick FYI! – The inquiry must be completed within a period of 90 days.

How does the proceeding take place?

The complainant shall submit 6 copies of the complaint along with supporting documents to the ICC. They also need to submit names and addresses of witnesses.

Quick FYI! – Parties are not allowed to bring legal representation at any stage of the proceedings.

Quick FYI! – ICC can terminate the proceedings or give an ex-parte decision if the respondent or the complainant fail to show up for three consecutive hearings. However, this termination/ex-parte order must be passed only after giving a 15 days written notice in advance to the failing party. The complainant can also ask the ICC to make an ex-parte decision if the respondent has acted in the above mentioned manner.

There are certain details related to the case that shall not be shared with the press, media or the public in general, and cannot be put up in any public domain. These details include –

Quick FYI! – Anyone who breaches confidentiality is liable for punishment and the employer can recover Rs 5,000 from the failing party for such violation.

Quick FYI! – RTI can still be filed for information that can be made public. For example – Number of complaints received by the ICC, the number of cases where recommendations were made, time taken to make recommendations etc.

Apart from enabling and ensuring fair trial, ICC has various other responsibilities.

Counting Accountability!
Responsibilities of the Higher Education Institution Following are some major responsibilities and duties of an HEI which it must fulfil –
Non-Compliance penalties

Penalties can be levied against an institution by the ICC for –

If the HEI fails to fulfil its responsibilities or duties, the ICC may, among other penalties, withdraw its declaration of fitness to receive grants, declare the institution ineligible for consideration for any assistance, inform the general public through newspaper and other media outlets that the university does not provide for a zero-tolerance policy against sexual harassment, recommend the affiliating university for withdrawal of affiliation, recommend the Central or State government to withdraw its recognition of the HEI.

These penalties are serious in nature and have been provided so that the HEIs take active steps to ensure a zero-tolerance policy against sexual harassment and strict compliance to the ACT and Regulations.

Quick FYI: No action shall be taken by the Commission under these regulations unless the Institution has been given an opportunity to explain its position and an opportunity of being heard has been provided to it.

Diversity and Vulnerabilities : POSH and Intersectionality

One of the best aspects of the UGC Regulations is its inclusive language. The Regulations have been drafted after taking into consideration the diverse identities of individuals, and recognises the fact that certain sections of the society are more vulnerable to harassment and discrimination than others because of their marginalised and/or intersectional identities.

The Regulations also state that vulnerable groups are particularly prone to harassment and also find it more difficult than others to complain. Further, it provides for who may be recognized as vulnerable groups. Vulnerability can be socially compounded by region, class, caste, sexual orientation, minority identity and by being differently abled. Enabling committees must be sensitive to such vulnerabilities and special needs.

This being part of the UGC Regulations mandates HEI to pay special attention to employees and students falling in the vulnerable groups. HEI should conduct not only regular gender sensitisation training, but also awareness and sensitivity training for all sections of the HEI towards vulnerable groups. This is because the nature of the UGC Regulations is not directive, but informative. A thorough reading of the Regulations make it clear that the language adopted in it aims not towards providing punitive measure against sexual harassment, but to prevent it before happening. Hence, it is extremely important that the HEI takes all measures to not only aware its community of the what sexual harassment is and the redressal mechanisms under the POSH Act, but also to sensitize and aware its community through regular workshops on various aspects of diversity, vulnerabilities, gender and gender-based harassment, violence and discrimination.

Things To Keep In Mind while filing a complaint

Filing a complaint can be intimidating and overwhelming, especially without guidance or easy to access information on the subject. For quick help, here are a few things to keep in mind while filing a complaint –

Quick FYI! Always ask for a signature and date, preferably with some stamp if possible, acknowledging receipt of all your communication with LCC, ICC.

This toolkit has been designed with the objective of providing the much needed information around sexual harassment of women employees and students in higher educational institutions in an easy to consume and simplified language.
Download the toolkit here